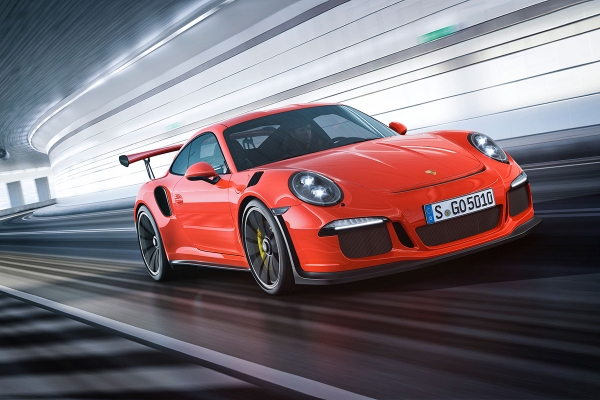 The new Porsche RS 911 GT3 is equipped with the highest level of racing technology, but also is approved for road and suitable for everyday driving.

The 911 GT3 RS is powered by a six-cylinder engine and four liters, 500 480 horsepower and Newton / meter maximum torque combined with PDK transmission. This engine makes the car to accelerate from 0 100 km / h in 3,3 and 0 seconds to 200 km / h in 10,9. Its average fuel consumption is 12,7 l / 100 km. Incorporates special functions such as disengaged through "neutral cam" (which is comparable to push the clutch in a box of conventional manual transmission) and speed limiter button by Pit Speed, adapted for use in competition.

The 911 GT3 RS is also lighter. Its roof is magnesium; the carbon fiber is used for the engine and the boot lid. Other light components are made of alternative materials. Thus, the RS model is ten kilos lighter than the Porsche 911 GT3. On the other hand, that roof lowers the center of gravity of the sports car, which improves its excellent lateral dynamism.

The body is the 911 Turbo and accentuates its appearance to that of a racing car, thanks to the addition of RS specific aerodynamic parts. The lip of the front spoiler, which stretches almost touching the road, and the large rear spoiler reinforce its sporty appearance. A recess of 30 centimeters wide spans the central part of the hood and the magnesium roof, in a stylistic nod to the slit of the hood of the classic 911 models, with air-cooled engines.

Another distinguishing feature is the vent of the front wheel arches, extending towards the top of the fins, as in pure racing cars. This increases downforce on the front axle.

The interior design of the Porsche RS 911 GT3

The Porsche RS GT911 3 has several elements in Alcantara and is based on the current 911 GT3. As a novelty, incorporates bacquet seats, seats based carbon used in the 918 Spyder.

Equipment of the Porsche 911 GT3 RS

Also optionally you can mount the Sport Chrono package incorporating well integrated timers, the Porsche Track Precision smartphone application. Precision Track The app can be used to automatically measure lap times, through GPS, and to record data on various parameters of driving on the smartphone, such as vehicle speed, lateral acceleration or accelerations and decelerations in the direction of travel.

With this application, the driver can manage data and share and compare with other pilots.

Edwin Granado replied to topic 'Doubts about the "teeth" of the clutch press'Forum. 7 hours 42 minutes

Well, like the last post, I have to "autoresponder" for the absence of help. . For those novice mechanics like me, who are looking for answers here from the experts, investigate the problem further. The teeth of the press, as the screws are tightened, should be lowered to no less than 7 or 10 mm from the flywheel (depending on each vehicle model). This movement is what allows the press to keep the clutch disc pressed against the steering wheel, as the disc is worn out with use. If when mounting a disc and tightening the nuts of the press, the teeth remained in the same place without descending, when starting the engine, there would simply be no traction, what it would do is slide when releasing the clutch. If, on the contrary, the teeth descend too much, remaining stuck to the steering wheel (which was my case), because there will be nothing that the collar can move, therefore the car will not have a clutch, the disc always being pressed against the steering wheel. This happens for two reasons, the first is that the press is not working well, or that the paste of the disc is very thick, forcing the teeth to fall too low. This was what I could find out about my doubt. I hope this information is useful to someone.