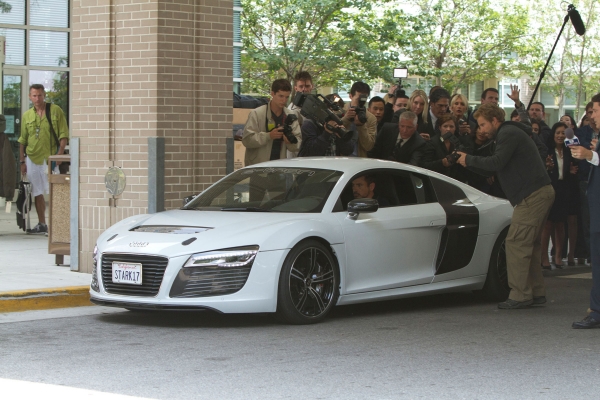 Audi joins forces with Disney and Marvel Studios to launch 3 Iron Man, which opens on May 3 2013 and where the new E-Tron prototype R8 appears.

Audi is once again, leading protagonist throughout the film. The Audi R8, R8 Spyder, A8, Q5 S7 and appeared in the first and second installment of the saga.

Robert Downey Jr. will reprise his role as Tony Stark, the main character of the film, whose alter ego, the superhero Iron Man is the result of an indestructible armored suit of high-tech and extremely versatile. When Stark hang your suit, you can see the technology adept billionaire behind the wheel of prototype electric sports car R8 e-tron. Oscar ® winner Gwyneth Paltrow also returns as Virginia "Pepper" Potts, Stark Industries CEO Tony Stark girlfriend, and drives an Audi Sportback S7.

Iron Man tells the story of 3 cheeky but brilliant industrialist Tony Stark / Iron Man against an enemy whose power is limitless. When Stark finds his personal world destroyed at the hands of his enemy, he embarks on a harrowing quest to find those responsible. This trip will test his mettle. With his back against the wall, Stark is forced to survive on their own, relying on their wits and instinct to protect the people closest to him. In their struggle, Stark discovers the answer to the question that plagued him in secret: the man makes the suit or the suit make the man?

Starring Robert Downey Jr., Gwyneth Paltrow, Don Cheadle, Guy Pearce, Rebecca Hall, Stephanie Szostak, James Badge Dale, and with the emergence of Jon Favreau and Ben Kingsley, Iron Man 3 is directed by Shane Black from a script Drew Pearce and Shane Black, and is based on the iconic superhero Iron Man, who first appeared in the pages of "Tales of Suspense" in 1963 and had his solo debut with the comic "Invincible Iron Man" in May 1968.

Do you've been bitten by the bug? If so then you have the trailer :)

Rate this item
(0 votes)
Published in Curiosities
Tagged
More in this category: "The actions of environmental protection unite in Skoda Green Future Audi is working on the development of sustainable production systems aluminum »
go back up

George created the new topic ' problems with the A / C'Forum. 9 hours 20 minutes

Good afternoon, I would like to consult the technical specifications of the A / C compressor, how much gas it carries, what quantity of liquid it has, I have looked for it in the workshop manual and nothing appears, someone can help me please

Hello, I am new to the forum: I have a problem with the control of closing and opening doors of a KAGOO 1200 petrol of 2001 and that is that I program the controls and they work perfectly but after 30 minutes they stop working, to see if anyone knows about the topic. Thank you