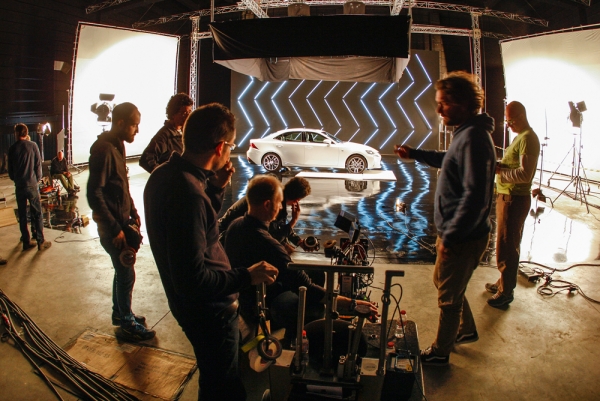 Barcelona and surroundings witnessed a shooting days ago Video presentation of the new hybrid model LexusThe new Lexus IS 300hThis video was first screened exclusively at the last Geneva Motor 2013.

The shooting of the video Lexus IS 300h It lasted four days in the team, composed of more than 60 professionals-mostly-Spanish audiovisual sector has been put under the command of the director of the famous English Television program Top Gear, Konrad Begg.

Lexus has chosen Konrad Begg for his extensive experience in automotive filming. Throughout his career, Begg has directed some entertainment programs for the BBC, among which is Top Gear, the TV series that tackles humorous motorsport. In addition, Begg had worked with Lexus previously, which defined it as a "premium experience fully."

This video presentation is part of the communication strategy of the company is carried out at European level, in which the market Lexus IS 300h will be released next June. To reach these consumers the video has been approached from a broad perspective in which, in the words of the director, on the one hand "is intended to highlight the dynamism of the car's design and power" and the other "create excitement" transmitting the values ​​of this firm premium cars.

Transmit the driving pleasure, elegance model or brand exclusivity offered to their customers through the picture has not been easy, but for this, Begg driving sequences combined with outdoor images Lexus IS 300h surrounded by a suggestive lighting that highlights the lines of the car. Also participating in the spot a cast of dancers and models that bring a personal touch to a video with an undisputed protagonist: the new Lexus IS 300h.

Rate this item
(0 votes)
Published in Curiosities
Tagged
More in this category: "You know Nismo.TV? A Spanish transport company added to its fleet a vehicle propelled by LNG (Liquefied Natural Gas) truck »
go back up