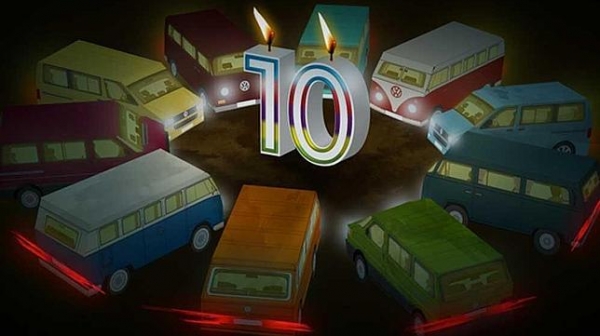 The meeting furgoneteros Furgovolkswagen this year celebrates its tenth anniversary and this time will become a tribute to the fans of furgos, by which this European concentration has already made history.

Registrations of 10 edition of the FurgoVolkswagen, To be held from June 14 to 16, 3 opened last April and it is expected that this year participation records blended.

As before, the European meeting Furgovolkswagen will take place in the Ballena Alegre Camping Sant Pere Pescador, near the beach and the sea. A weekend full of events and surprises around the Volkswagen vans of all ages, models and versions, which, for the tenth consecutive year come from all over Spain and Europe week.

Share emotions, experiences and common values, is the essential goal of this concentration. This year the players are the fans of furgos, because without them this event would never have happened. Again, there will be barbecue, parades, group photo, distribution of prizes, music, outdoor screenings and events planned for all ages, as evidence of World Championship Windsurfing, year after year fail the conclusion of the meeting Furgovolkswagen to celebrate one of the most charismatic quotes contest.

In the last edition of the FurgoVolkswagen involving over 500 3.000 vans and fans who came faithful to the call of this iconic event.

Rate this item
(0 votes)
Published in Events
Tagged
More in this category: 'Skoda Octavia RS presented the new the "Goodwood Festival of Speed" 2013 New Golf GTI: up 230 CV »
go back up