GT Academy 2013 Spain and has representatives 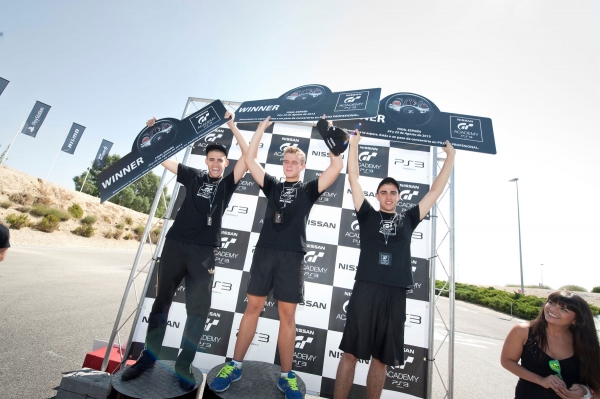 Competition GT AcademyPromoted by PlayStation ® and Nissan, already has three Spanish representatives who will attend the European Race Camp at Silverstone during the month of September. Miguel Ballester, Daniel Consuegra and Oscar Ruiz three drivers were winners in an exciting national final to be held in Madrid.

Back in the day Sunday, the nine finalists returned to test your virtual driving skills at the wheel of PlayStation ® 3. First a qualifying round that took out three riders was played. Six were participants who agreed to the next phase of the national final.

Miguel Ballester, Maksim Hasyuk, Daniel Consuegra, Oscar Ruiz, Nabil Khoury and Javier Dévora were classified. First qualifiers were played 'one on one' with Gran Turismo ® 5 to elucidate the sort order in the virtual test. By now, the six driving a Nissan Nismo 370Z got to the actual driving test.

Then they faced an interview that put your personality test and a demanding physical tests that measured their fitness. Participants gave their all to prove that they had needed to go to the European final of Silverstone qualities.

Finally the winners were Miguel Ballester, Daniel Consuegra and Oscar Ruiz, In September will be subject to different driving challenges during the Race CampAs well as tests of physical and mental state, all under the watchful eye of judges and prominent professors of GT Academy. The goal, realize your dream and become a professional pilot. The winner of the competition will compete 2013 an entire season at the wheel of a Nissan GT-R Nismo GT3 over 500 horses.

The driver development program GT Academy has become one of the most powerful and effective of the current automotive scene. Now in its fifth edition, the results of the winners of previous editions demonstrate the degree of evolution that has reached the competition. An example of this are the wins championships and podiums LMP2 of Lucas Ordonez in 24 Hours of Le Mans. The Spanish pilot and ambassador of Nissan in Spain, was the first winner of GT Academy and since 2008 has not only grown as a professional pilot coming to recently compete in the Super GT Japanese in addition to being named last week pilot testing and development of innovative electric concept Nissan ZEOD RC, with which the mark Japanese held the 24 Hours of Le Mans 2013.

Miguel Ballester, Daniel Consuegra and Oscar Ruiz fight to follow its lead and achieve your dream. The three Spanish players will travel to the UK to face the other European participants. Only one can win the lucky prize and compete in Dubai 24 hours.

Boas afternoons can someone help me with a workshop manual for Linde n20? thanks

what engine is it

Good morning, maybe this is not the right way, but I want to send you,
Kind regards from Boquete, Chiriqui, Panama right now
so critical that it affects us all in one way or another. Hopefully God
Give us wisdom and strength to get out of this difficult test together and remember to stay home because this is how you and your loved ones take care of yourself.
God bless you.
Nelson Acosta Moreira