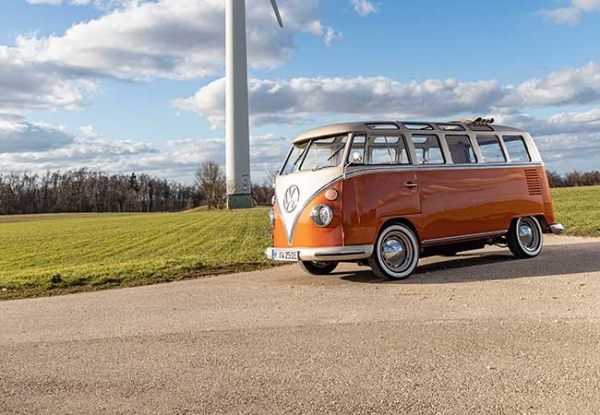 Volkswagen has been developing a complete family of electric models covering a wide variety of segments for some time, now it is the turn of the classic Bulli van, as it has developed a 100% electric version, the Volkswagen e-Bulli.

This model was to be unveiled at Techno Classica 2020, but the cancellation of the event due to the global coronavirus crisis has forced VW Commercial Vehicles to publicize it virtually.

But let's talk a little about what is new in this reissued classic. The exterior continues to retain all its charm as it is based on a 1 T1966 Samba, adding a striking 2-tone paint (Energetic Orange Metallic and Golden Sand Metallic Matte). However, some things have been modernized abroad, such as the optical groups, which in the e-Bulli are LED technology.

Regarding the interior cabin, with capacity for 8 people, although it still maintains a retro air thanks to its two-color design and the solid wood upholstery, in reality it has been remarkably modernized since it incorporates, for example, a tablet that does the times entertainment center.

Where it is little like its classic version is, in the propulsion system. It replaces the original four-cylinder boxer engine with an 83 hp and 212 Nm torque electric mechanism that is also mounted in the rear position, this provides the vehicle with almost twice the power of the original, bringing its maximum speed to 130Km / h electronically limited.

To cope with the increased power of the powertrain, the chassis of the Volkswagen e-Bulli has also had to be adapted. There are reinforcements of all kinds and a new suspension scheme is introduced. It also debuts the steering and four brake discs to improve in this area.

A 45 kWh battery is responsible for supplying energy, allowing it to travel up to 200 kilometers. With a 50 kW fast charger it is able to fill 80% of its capacity in 40 minutes.

Rate this item
(56 votes)
Published in Automotive News
Tagged
More in this category: «Peugeot 2008 the versatile and compact SUV Strong collapse in vehicle sales in March due to the pandemic »
go back up