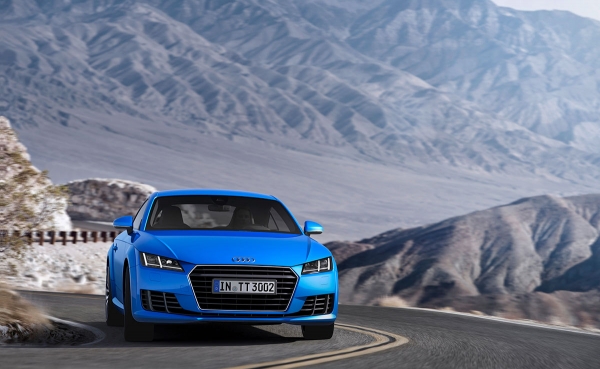 The third generation Audi TT Coupe car will reach the UK showrooms this September. Initially it will be sold with two engines, one petrol and one diesel, both two-liter engine with a power of 230 184 CV and CV.

The range of this vehicle will be composed of three versions: the 2.0 TFSI 230 CV, with six-speed manual gearbox and front-wheel drive; a variant of gasoline that uses the same mechanics, but which is equipped with the quattro all-wheel drive system and the S tronic transmission with dual clutch and six gears; and a version with the diesel engine of 1.968 cubic centimeters and 184 CV. A few months later, the sportier model, the TTS Coupé, Which also uses 2.0 TFSI engine, with modifications will raise its power to 310 CV.

The Horizontal lines dominate the appearance of the Audi TT Coupé third generation and give it width and sportsmanship. On the front of the grid is wider and flatter than the previous model and a line dividing it into two.

The new Audi TT Coupé measures 4,18 meters, a length similar to that of previous models. However, the wheelbase has increased 37 millimeters. The current space of 2.505 millimeters, results in especially short overhangs.

The lower structure Audi TT Coupé includes steels with high and very high resistance, Whereas in the zones of the passenger cell are used Preformed panels ultra rigid plate yet lightweight. The stringers under doors and roof framing are made aluminum extrusionsMaterial that is also used on the hood, doors and tailgate.

In total, The new Audi TT Coupé is 50 kilos lighter than its predecessor, which in turn saved 90 kilos over the previous model. The TT Coupe TFSI now weighs only 2.0 1.230 kg, which improves performance, behavior, and reduces fuel consumption and emissions. For example, 2.0 TDI version now has an average emission of CO2 only 110 grams per kilometer.

The new Audi TT Coupé has a set of fully digital instrumentation and graphic animations with variable high precision. Analog gauges are eliminated. The user can choose between two display modes: the classic format, highlighting the speedometer and tachometer, or infotainment mode, where in addition to the two above, other features like the navigation map is.