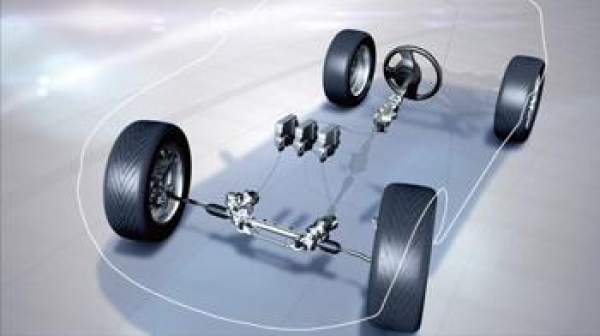 Nissan has introduced the first management system that allows control of the angle of the wheels independently of the wheel. This e-generation has been developed by Nissan.

Conventional systems address the direct movement of the wheels according to commands from the steering wheel through a mechanical connection therebetween. The new Nissan analyzes address the intentions of the driver through the steering wheel movement and decides the appropriate angle of rotation of the wheels by electronic signals. This transmission direction is faster than the traditional mechanical system and increases ride quality by providing a faster and more direct communication between the driver and which is transmitted from the road surface.

The system monitors and isolates the vehicle eliminating the distortions generated by the road and the driver crosses only the sensations necessary for driving. On roads with a rough surface or with small bumps the driver will no longer have the need to hold the steering wheel tightly and make small corrections of the path, so it will be much easier to maintain the desired direction.

Associated with this steering technology, Nissan has developed a system to improve the linear stability when riding in a straight line, using a view camera and automatically makes small adjustments to the steering angle for the vehicle to hold the line marked by the driver.

The view camera is installed at the base of the mirror, through it the system displays the road that you drive, identifies the signaling lines thereof, detects changes in the direction of the vehicle and transmits that information to the different switchboards vehicle control through electronic system to process the signals. If it detects a discrepancy between the analysis of the road and the wheel position, acts to reduce the discrepancy by controlling the opposing force to the angle of the wheels. By reducing the frequency with which the driver must make small steering corrections reduces fatigue on long journeys.

The reliability of this system e-mail address is assured thanks to the work of multiple control units (ECU) control. In the case of the ECU malfunction, other ECU immediately take control and in extreme circumstances, for example, a failure of the main electrical system, an emergency clutch act to establish a physical connection between mechanical the steering wheel and the wheels, which would continue driving safely.

Rate this item
(0 votes)
Published in New technologies
Tagged
More in this category: "New navigation system RNS 315 for Polo, Jetta and Golf Plus Peugeot commitment to downsizing '
go back up

George created the new topic ' problems with the A / C'Forum. 9 hours 20 minutes

Good afternoon, I would like to consult the technical specifications of the A / C compressor, how much gas it carries, what quantity of liquid it has, I have looked for it in the workshop manual and nothing appears, someone can help me please

Hello, I am new to the forum: I have a problem with the control of closing and opening doors of a KAGOO 1200 petrol of 2001 and that is that I program the controls and they work perfectly but after 30 minutes they stop working, to see if anyone knows about the topic. Thank you